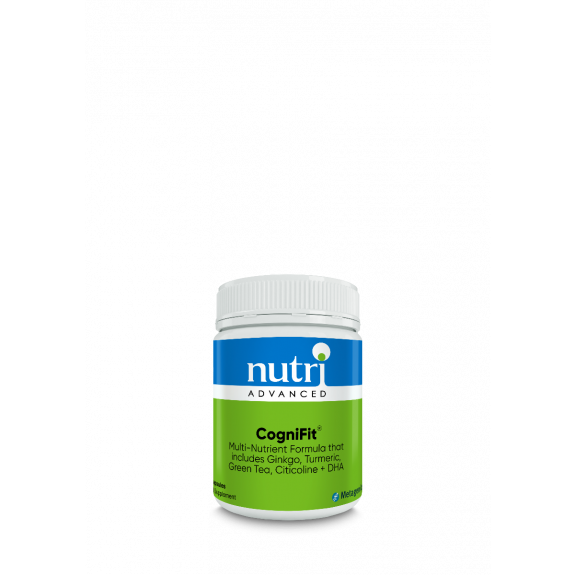 CogniFit®, is a multi-nutrient formula that includes Ginkgo, Turmeric, Green Tea, Citicoline, and DHA for normal brain function. It also contains a range of B vitamins that support our psychological function. This comprehensive formula helps to provide nourishment and support for the structure, function and the protection of the brain.

CogniFit®, contains Ginkgo (Ginkgo biloba) standardised to ginkgo glycosides and terpene lactones. Scientific studies validate its positive effects on the microcirculation (tiny blood vessels), increasing circulation, resulting in increased oxygenation and nourishment to the brain. It may enhance and maintain cognitive function, performance and memory, all whilst protecting cells from oxidative damage.

The formula also contains citicoline as COGNIZIN®, a clinically studied form of citicoline, a naturally occurring nutrient found in the brain. Functionally, it is a precursor to phosphatidylcholine, which is critical for healthy brain function.

DHA and EPA are omega 3 essential fatty acids most abundantly found in deep sea oily fish. DHA is a structural component of cell membranes, and contributes to normal brain function. This effect is achieved with an intake of at least 250mg per day – the amount of DHA within each CogniFit®, capsule.

Studies continue to show that raised homocysteine levels significantly increases the likelihood of cognitive decline. Folate, Vitamin B6 and vitamin B12 all contribute to normal homocysteine metabolism. These vitally important B vitamins are present within CogniFit®, in the most bioavailable, active, body-ready forms, with B6 as pyridoxal-5-phosphate, B12 as methylcobalamin and folate as 5-MTHF.

CogniFit®, features a range of B vitamins that include B1, B6, B12 and folate which support normal psychological function. Thiamine (vitamin B1), vitamin B6 and B12 also contribute to the normal functioning of the nervous system.

Zinc is an important mineral which supports normal cognitive function. Here it is present in the form of bisglycinate, which is a very well-absorbed form.

Vitamin E is included, which helps to protect cells, including the cells in the brain, from oxidative damage.

Alpha lipoic acid is a cofactor involved in the energy production within the cells. It may also protect against free radical damage.

Provides vitamin D3, the preferred form of vitamin D as it is the same form made by the skin in response to sunlight. Each capsule contains 1000iu D3.

Take 1 capsule daily, or as directed by your healthcare practitioner.

Can capsule be opened and sprinkled onto food?
No

If pregnant, breastfeeding, taking any kind of medication or have a medical condition, consult a healthcare practitioner before using this product.

If taking anti-coagulants, consult a medical doctor before using this product.