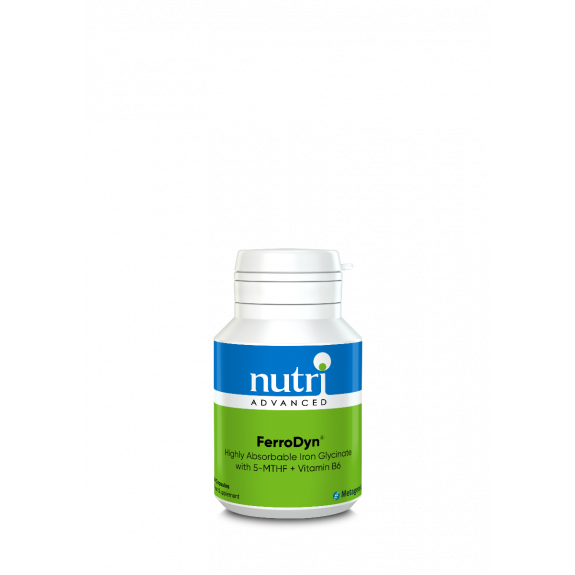 FerroDyn® provides iron as iron bisglycinate which is a superior, highly absorbable form of iron compared to other cheaper forms of iron used in some supplements. Iron bisglycinate is well tolerated especially by those with sensitive digestive systems meaning no upset stomachs sometimes experienced with other forms of iron. FerroDyn® has the added benefit of folate and vitamin B6 in their active, body-ready forms which work synergistically with iron to support the formation of red blood cells, normal energy levels and the reduction of tiredness and fatigue.

What do we need iron for?

Iron plays a role in the process of cell division, meaning it is essential for the formation of every cell in the body.

Iron is also needed for normal cognitive (brain) function and the functioning of the immune system.

Why is folate important?

Folate functions as a coenzyme, meaning it helps other enzymes in the body carry out important jobs. One important job is contributing to normal homocysteine metabolism. Homocysteine is a naturally occurring intermediate compound in the breakdown of the essential amino acid methionine. If levels of homocysteine are allowed to build up, however, this can have negative implications for cardiovascular health and cognitive function.

Folate also contributes to maternal tissue growth during pregnancy and the Department of Health recommend daily supplementation of 400mcg folate for pregnant women to support tissue growth in the placenta and uterus.

Why are the active forms of vitamins important?

By using the body ready form of folate (folic acid) - 5-methyl tetrahydrofolate (5-MTHF),  the body does not have to perform any additional metabolic steps in order for it to be utilised by the body. This not only means that the beneficial effects of folate may be felt more quickly but it combats the issues experienced by some people who are unable to convert folic acid into its active form due to a genetic variation.

Similarly with vitamin B6, before it can be used it must first be converted into its coenzyme form pyridoxal-5-phosphate (P-5-P) by the liver. By using this form, as we have in FerroDyn®, this step is eliminated allowing for great bioavailability and may also be important for individuals with an inefficient conversion of inactive to active B6.

Take 1 capsule daily, or as recommended.

Suitable for adults, in particular vegetarians and vegans, and women who experience heavy menstrual bleeding.

Suitable during pregnancy and breastfeeding.

If taking any kind of medication or have a medical condition, consult a healthcare practitioner before taking this product.