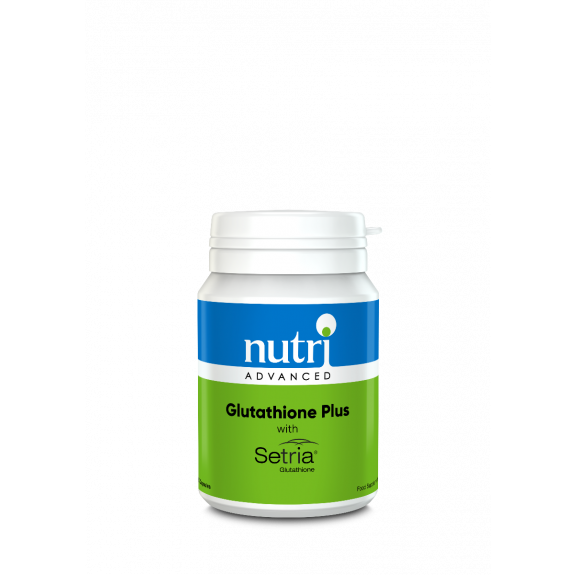 Why choose Glutathione Plus?

Modern living can make us susceptible to oxidative stress leading to oxidative damage which may contribute to premature ageing and chronic disease. Oxidative stress can be caused by smoking, chronic stress, environmental toxins and a poor diet to name but a few. Antioxidants, found in colourful fruits and vegetables, may help to negate the effects of oxidative stress. Glutathione Plus provides the 'master antioxidant' glutathione alongside milk thistle, green tea, turmeric, alpha lipoic acid and selenium.

Gluathione Plus is ideal for those who may be in need of improving their glutathione status. Glutathione is biologically critical to the proper functioning of the immune system and to protect all cells from damage - all of us could benefit from healthy glutathione levels.

Why do we need Glutathione?

Maintaining adequate levels of glutathione within the body is very important for maintaining our health. The body produces its own glutathione and glutathione is found within most cells in the body where it protects them from oxidative stress and supports the detoxification of toxins and carcinogens. However levels may be depleted by poor diet, pollution, toxins, stress, ageing and infections. Even partial glutathione depletion has been shown to impair immune function and increase our susceptibility to free radical damage. Glutathione is known as the 'master antioxidant' because of its ability to recycle other antioxidants, as well as protect cells from oxidative damage.

Take 2 capsules daily, or as directed by your healthcare practitioner.

Suitable for adults and children over the age of 12 years.

Glutathione Plus has had a minor reformulation. Magnesium stearate has been removed and replaced with Cellulose, Ascorbyl Palmitate and Silicon Dioxide, and the capsule will now be slightly larger.