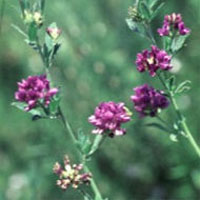 While the medicinal benefits of alfalfa are poorly understood, the constituents in alfalfa have been extensively studied. The leaves contain approximately 2–3% saponins.3 Animal studies suggest that these constituents block absorption of cholesterol and prevent the formation of atherosclerotic plaques.4 One small human trial found that 120 grams per day of heat-treated alfalfa seeds for eight weeks led to a modest reduction in cholesterol.5 However, consuming the large amounts of alfalfa seeds (80–120 grams per day) needed to supply high amounts of these saponins may potentially cause damage to red blood cells in the body.6 Herbalists also claim that alfalfa may be helpful for people with diabetes. But while high amounts of a water extract of the leaves led to increased insulin release in animal studies, there is no evidence that alfalfa would be useful for the treatment of diabetes in humans.7

Alfalfa leaves also contain flavones, isoflavones, sterols, and coumarin derivatives. The isoflavones are thought to be responsible for the oestrogen-like effects seen in animal studies.8 Although this has not been confirmed with human trials, alfalfa is sometimes used to treat menopause symptoms.

Dried alfalfa leaf is available as a bulk herb, and in tablets or capsules. It is also available in liquid extracts. No therapeutic amount of alfalfa has been established for humans. Some herbalists recommend 500–1,000 mg of the dried leaf per day or 1–2 ml of tincture TID.9

Learn more about TraceGains, the company.

The information presented by TraceGains is for informational purposes only. It is based on scientific studies (human, animal, or in vitro), clinical experience, or traditional usage as cited in each article. The results reported may not necessarily occur in all individuals. Self-treatment is not recommended for life-threatening conditions that require medical treatment under a doctor's care. For many of the conditions discussed, treatment with prescription or over the counter medication is also available. Consult your doctor, practitioner, and/or pharmacist for any health problem and before using any supplements or before making any changes in prescribed medications. Information expires December 2021.