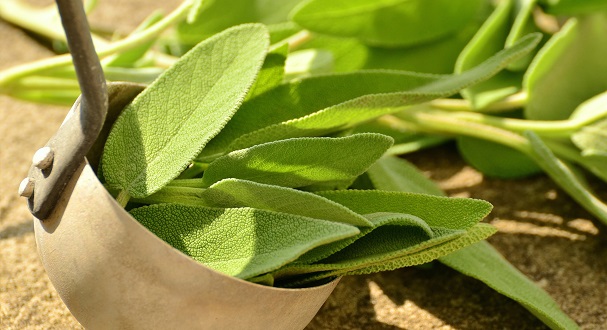 Could Sage Be The Answer To Peri-menopausal Hot Flashes?

Of all the symptoms a woman experiences throughout her peri-menopause – and sometimes beyond – hot flashes (or flushes) rank right up there as among the most bothersome. A hot flash is a sudden feeling of intense heat or warmth that seems to come from nowhere, and quickly spreads throughout the body, in particular the face, neck and chest. It can occur at any time of the day, often lasting several minutes, and is due to the blood vessels in the surface of the skin opening up, allowing blood to flow through and the excess heat to be dissipated into the air. More severe hot flashes may involve other vasomotor symptoms such as sweating and if they occur at night can cause considerable disruption to sleep, commonly referred to as night sweats.

Although not considered to pose any inherent risks to health, hot flashes can be incredibly uncomfortable for the sufferer, interfering with normal daily functions and causing increased stress, lowered mood and poorer sleep quality. The sage plant, a member of the Lamiaceae family native to Mediterranean Europe, has a long history of traditional use in supporting a reduction in hot flashes, night sweats and associated climacteric complaints in menopausal women.

A 2011 study involving 71 women across 8 treatment centres in Switzerland was carried out to assess the safety and efficacy of sage as a support to reduce the frequency and severity of menopausal hot flashes. They were treated with a daily tablet of fresh sage leaves for 8 weeks. Results showed that half of the women experienced a significant decrease in hot flash symptoms after 4 weeks, and 64% experienced benefits after continuing with the treatment for 8 weeks. On average, the hot flashes decreased every week, and severe flashes were eliminated completely.1

In 2016 a double-blind randomised clinical trial was performed on 100 menopausal women with hot flashes. In the study, the women were divided into two groups and given either 3 sage tablets (100mg) or a placebo daily for 8 weeks. Oestradiol hormone levels and menopause symptoms were evaluated using the Menopause Rating Scale (MRS) 1 week before and after 8 weeks. Duration, intensity, and frequency of hot flashes and night sweats were also evaluated every week, and the two groups were compared in terms of these variables. After 8 weeks, hot flashes, night sweats, and MRS scores significantly decreased in the sage group compared to the control group. The researchers concluded that extracts of sage significantly reduced the frequency, severity, and duration of treatment of hot flashes, night sweats, and other menopausal symptoms and can be considered as a safe and effective alternative therapy for the individuals who are not able to use HRT.2

In 2019, an interventional clinical trial was published in the International Journal of Reproduction BioMedicine involving 30 women aged between 44–58 experiencing various degrees of menopausal symptoms, recorded by a Menopause Rating Scale (MRS). Participants received a 100mg capsule of sage extract daily for 4 weeks and the severity of symptoms were compared before and after the 4-week supplementation period. Results showed significant differences in the severity of hot flashes, night sweats, panic, fatigue and concentration following supplementation with sage extract. The authors concluded that Salvia officinalis was effective for changing the severity of some menopausal symptoms.3

So, for women suffering with unpleasant flashes and other symptoms during the peri-menopause, the mighty sage plant – which has been shown to provide some real benefits both anecdotally and in a clinical setting – may just provide the answer. When considering supplementation with this valuable herb it’s important to note that fresh sage extracts are regarded as superior in terms of efficacy.