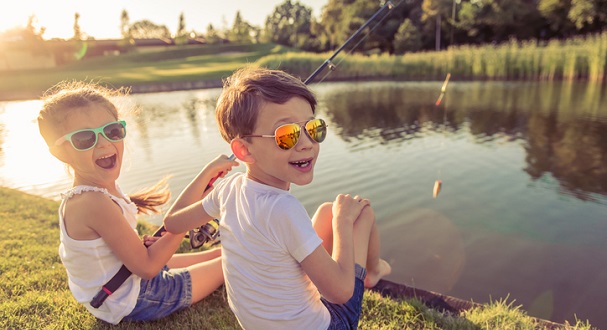 Top 10 Reasons to Give Your Kids Omega-3

1. Omega-3 is needed for the growth of the brain
The brain grows at its greatest rate from birth up until about 2 years old, though development continues throughout childhood and adolescence. Over 60% of the brain is made up of fat and the Omega-3 fatty acid DHA (docosahexaenoic acid) makes up around 10-15% of this. DHA is necessary for the development of the sensory, perceptual, cognitive, and motor neural (nerve) systems during the brain growth spurt. The DHA-rich parts of the brain are thought to be responsible for activities such as planning, problem solving, and focused attention.1,2

2. Omega-3 fatty acid DHA supports brain function
DHA in particular is recognized as essential for normal brain function. It helps to improve membrane fluidity, which means that nerve impulses, or messages, are transmitted more effectively.   In animals, low brain DHA results in changes in behavior and is associated with learning problems and memory deficits. In humans, studies indicate that DHA supports normal IQ and preserves learning and memory.

3. Omega-3 may improve reading and maths skills
Researchers at Oxford University studied children given 600mg omega-3 daily for 4 months. The results of this study, called the DOLAB study, showed that children in the bottom 20% for literacy boosted their reading age by 3 weeks more than the placebo group and those in the bottom 10%, by 1.9 months. Though more research is necessary to confirm or rule out these findings, the results indicate that omega-3 may be particularly helpful for those children with the poorest reading skills who are underperforming.4

In another study in Bradford, where pupils were given omega-3 fish oil on a daily basis, this resulted in 81% of pupils showing an improvement in reading, 67% in writing and 74% in Maths.

4. Omega-3 may improve childrens' sleep
Most parents (including myself!) are on a quest for a good night’s sleep for their children! The DOLAB study also investigated whether omega-3 supplementation could have a beneficial effect on sleep. The results showed that poor sleep is significantly associated with lower blood levels of DHA, and that DHA supplementation led to a reduction in the number of night time disturbances, as well as 58 minutes more sleep per night on average!5

5. Omega-3 for depression in children
There are several studies demonstrating the effectiveness of omega-3s for depression in adults, but depression in children is actually becoming more common too. A controlled, double-blind pilot study in Israel looked at the effects of an over-the-counter omega-3 supplement in children aged 6-12 with major depression. The results were fantastic, with the majority of the children taking the omega-3 supplement having 50% fewer symptoms at the end of the trial and several children going into complete remission. Omega-3 fatty acids are believed to improve blood flow to the brain, which is thought to be reduced in those with depression.6

6. Omega-3 for ADHD
Attention-deficit/hyperactivity disorder (ADHD) is a common neurodevelopmental disorder. Standard treatment with stimulants can have severe side effects and intolerance and so the demand for an alternative treatment is high. Research has shown that lower levels of omega-3 are found in ADHD patients’ blood when compared to those without ADHD.

There have been lots of studies on the effects of omega-3 on ADHD but the results have been inconsistent. An article just last year reviewed a range of studies carried out between 2000 and 2015 and found that whilst the results were sometimes inconsistent, overall, showed that there is evidence that omega-3 intake can benefit those with ADHD.7,8

8. Early omega-3 exposure may reduce incidence of children’s allergies
A recent 2017 article reported that eating oily fish or fish oil supplementation in pregnancy may be a strategy to prevent infant and childhood allergic disease, whilst a study in infants from birth to 6 months found that omega-3s were able to modify markers of immunity and potentially be protective against allergies.10, 11

In addition, Bisgaard et al. reported a significantly reduced incidence of persistent wheeze or asthma at ages 3 to 5 years in children whose mothers took fish oil during pregnancy.12

All of this indicates that consumption of omega-3 during pregnancy by the mothers or intake of omega-3 in infancy may well be able to help reduce the incidence of allergic diseases, including asthma.

10. Omega-3 may reduce insulin resistance in obese children
In a study on obese children and adolescents, it was found that omega-3 fatty acid supplementation was able to significantly reduce glucose (blood sugar) and insulin (the hormone that stops your blood sugar levels from becoming too high) concentrations, as well as decrease triglyceride concentrations - triglycerides being the main components of body fat. These results suggest that omega-3s may be very useful as a supportive therapy for obese children and adolescents with insulin resistance.14