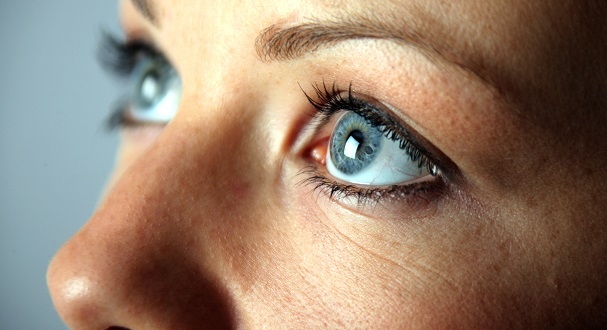 We are constantly bombarded with messages about the importance of using sunscreen to protect skin from UV rays (that’s a debate for another day…), yet rarely are we told what to eat to protect our eyesight now and into old age.

Sight is precious and it’s usually only when things start to go wrong that people think about taking action.  In fact, the best time to do something is now.

Masses of scientific research now show that dietary (and lifestyle) factors play a huge part in determining what happens to your eyes as you get older, so it’s worth taking the time to get to know what these are as soon as you can, to give your eyes the very best chance, no matter what stage of life you’re at.

Here we take a closer look at the leading causes of blindness in the developed world, and share with you some critically important info on how nutrition may help to reduce your risk and possibly even slow its progression. If you’re at all concerned about your eyesight, already affected by this common eye problem or even just interested in maximizing your eye health now to reduce risks of future problems, you need to read on.

The leading cause of blindness in the developed world
Age related macular degeneration (AMD) is the leading cause of blindness in the developed world. It is a progressive disease that significantly affects quality of life for those who are affected by it. AMD is a disease of the macula - the small central part of the retina that’s responsible for sharp detailed vision. There are two types of AMD: early and late. Early AMD can be present in the eye without any symptoms, however it often progresses into late AMD and this is when vision changes occur. If left untreated, or deemed untreatable, late AMD can result in loss of central vision, which means you can see everything except what you are directly looking at. Without central vision, someone with late AMD can’t watch TV, read, drive or recognise faces, and this can significantly reduce quality of life. Early diagnosis is important - the earlier a diagnosis can be made, the easier it is to intervene.

AMD – Who’s at risk?
There are some risk factors for AMD that you can’t do anything about. Factors such as light skin colour, light iris colour, ageing and possibly even female gender may increase your risk. There’s likely a genetic counterpart to the disease too. There are however, several significant risk factors that you can take control of to minimise your risk.

Smoking is a major cause of AMD
The leading modifiable cause of AMD; studies show that smoking dramatically increases the risk of AMD and appears to be cumulative over time.

There is also a higher risk of AMD in non-smokers exposed to passive smoking. A study published in the British Journal of Ophthalmology in 2006 reported that people living with a smoker double their risk of developing AMD1.

High-energy visible blue light from sunlight and other artificial sources such as LEDs, compact fluorescent lamps, tablets, TVs, computer screens and smart phones are a major cause of oxidative stress in the eyes. You can help to reduce oxidative stress by minimising the time your eyes are exposed to this harmful type of blue light and by wearing sunglasses which provide UV and blue light protection (labelled-UV 400). It’s impossible to avoid altogether though, so you need to make sure your internal defences against it are strengthened too. These defences come in the form of dietary antioxidants.

“As there are no other effective means of primary prevention other than smoking cessation, other possible changes in lifestyle including nutritional changes acquire enormous importance. Multiple studies revealed oxidative stress as one of the mechanisms implicated in the pathogenesis of AMD and diet is generally the main source of antioxidants.”2

Internal sunscreen for your eyes
Fortunately, your eyes contain macular pigment, which is a powerful antioxidant that helps to protect the retina from damaging effects of blue light. Concentration of macular pigments in the retina decrease with age and this may increase risks of developing AMD. Macular pigment is made up of key carotenoid nutrients called lutein3, zeaxanthin and meso-zeaxanthin. These antioxidant compounds absorb light and protect your macula from oxidative stress; a bit like internal sunscreen for your eyes. Your body cannot make them so you must get them from your diet.

Carotenoids are the red, orange and yellow pigments found in fruits and vegetables like kale, spinach, corn, apricots and orange peppers. Lutein and zeaxanthin are found in rich supply in these plants foods, meso-zeaxanthin is not typically found in the diet, however our bodies can make it from lutein. Together, these nutrients supply vital antioxidant protection for the macula and can help to reduce the risks of AMD.

Whilst it is crucial to eat a rich supply of brightly coloured fruits and vegetables every day to protect your eyes, and many other aspects of your health too, it is a challenge to eat enough to fully cope with the daily onslaught of oxidative stress. And consider too that concentration of macular pigments naturally decreases with age, so your daily intake of antioxidants becomes even more crucial as you get older.

Many studies have now shown that supplementation with lutein, zeaxanthin & meso-zeaxanthin may help to reduce the risk of AMD:
In a 2016 study, subjects consumed a daily formulation containing lutein, zeaxanthin, and mezo-zeaxanthin or placebo for 12 months. Results showed statistically significant improvements in contrast sensitivity compared to the placebo group. Contrast sensitivity testing is generally considered to be a more sensitive measure of visual function than conventional visual acuity testing. The study authors speculated that visual improvements are likely to be noticed by all adults who enrich their macular pigment levels with supplements, not just individuals with low baseline MP concentrations4.

A 2015 study published in the Journal of the American Medical Association Ophthalmology gathered data from 100,000 subjects (63,433 women and 38,603 men) ages 50 and older for more than 20 years. Diet and food intake questionnaires were used to evaluate intake of lutein and zeaxanthin. At the end of the study period, the incidence of macular degeneration among participants with lutein and zeaxanthin scores in the top 20 percent versus those with scores in the bottom 20 percent was compared. The researchers found a 40% reduced risk of advanced AMD in the study participants who consumed the most carotenoids.

The study authors commented that the results of the study ‘further strengthen the evidence base for a protective role of lutein and zeaxanthin’ (against AMD). They also said ‘because other carotenoids may also have a protective role, a public health strategy for increasing the consumption of a wide variety of fruits and vegetables rich in carotenoids could be most beneficial and compatible with current dietary guidelines.’6

And it’s not just about carotenoids…
Whilst carotenoids such as lutein, zeaxanthin and meso-zeaxanthin have received much attention for their protective roles against AMD there are other key antioxidant nutrients that are crucial for eye health too.

The Age-Related Eye Disease Study (AREDS) is a major clinical trial designed to learn more about the natural history and risk factors of age-related macular degeneration (AMD) and to evaluate the effect of high doses of vitamin C, vitamin E, beta-carotene and zinc on the progression of AMD. Results from the AREDS showed that high levels of antioxidants and zinc significantly reduce the risk of advanced AMD and its associated vision loss7.

In May 2013, the National Eye Institute completed the Age-Related Eye Disease Study 2 (AREDS 2), which tested several changes to the formulation. They tried adding omega-3 fatty acids, as well as substituting the carotenoid antioxidants lutein and zeaxanthin for beta-carotene. The study found that while omega-3 fatty acids had no effect on the formulation, lutein and zeaxanthin together appeared to be a safe and effective alternative to beta-carotene8.

The time to feed your eyes is now…
Age related macular degeneration is the leading cause of blindness in the developed world. It’s crucial that you are armed with the most current information on how to prevent or even slow the progression of this life-altering condition. Once again, powerful plant pigments are found to deliver significant benefits with research demonstrating how essential the key carotenoid nutrients lutein, zeaxanthin and meso-zeaxanthin are for providing antioxidant protection for the eyes, increasing the density of macular pigment as you age and even reducing the risk of AMD. If you want to protect your eye health now and far into the future you need to significantly up your intake of brightly coloured fruits and vegetables, and as large-scale studies have consistently shown, the addition of a supplement containing higher levels of these key nutrients is now considered to be an essential daily investment. Click here for a simple overview of common eye conditions (including AMD) & the key nutrients you need to protect your eye health for good.